A slightly unplanned project. We needed to test a 3D printer in the office, and seeing as it was Christmas, we printed a Death Star Christmas tree bauble. We already had a Star Wars themed Christmas tree, so it fitted nicely.

The Death Star model came from Thingiverse. The print took about 5 hours and as it was only our second 3D print, it was a pretty good quality.

It had a void in the middle, which fitted an Arduino Mini, so I installed some LEDs to make it flash …

I used a 24 RGB LED NeoPixel ring from Adafruit and an Arduino Pro Mini from SparkFun and a high brightness green LED. 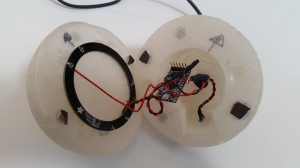 With the help of some hot glue, I installed the flashing innards. the two halves are held together with bits magnets from an old hard drive. Its powered by a USB power adapter, and the bauble hangs from the cable. 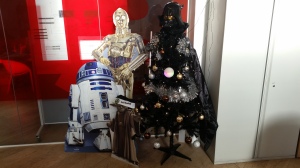 I’m pretty pleased with the result.